Floors mats are a simple and cheap investment to protect the interior of your Jeep Wrangler. The laser cut liners are the most protective, whereas the carpeting mats have more styles and designs to choose from. There's also the option of recarpeting your Wrangler entirely, but keep in mind the labor involved in such a project.

Whether you’re a tried and true off-roader or a suburbanite that likes to ride topless once in a while, both types of Jeep Wrangler owners eventually face the same problem. Wranglers get dirty, especially the flooring. The exposed interior can mean that the flooring might start to see wear and tear but there are a myriad of options when it comes to maintaining your Wrangler’s flooring. Most Wranglers have a fully carpeted interior that’s typically covered with floor mats. Simply replacing the floor mats can clean up the look, but you have options that include fully replacing the carpeting inside the Wrangler. 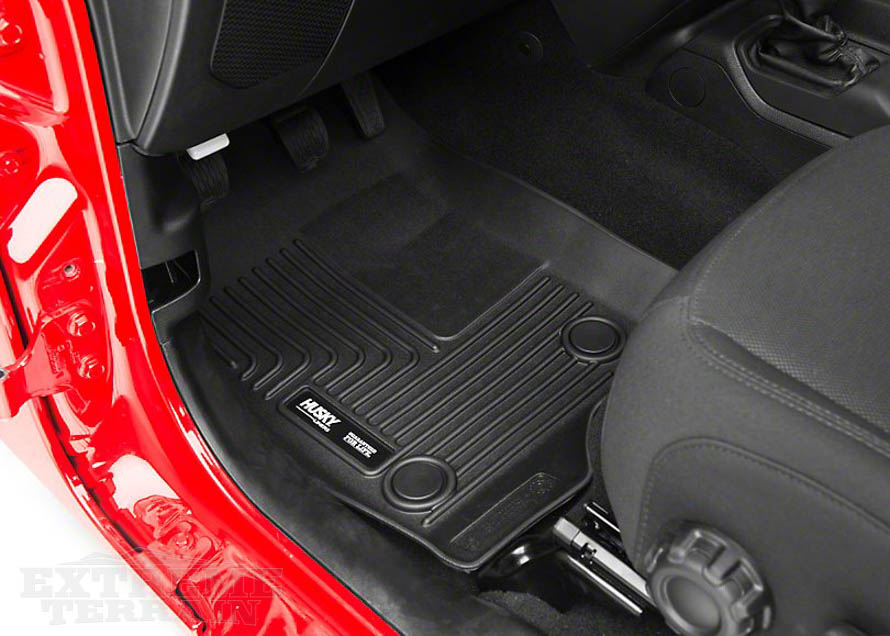 Interior Color Options for the Carpeting Across the Gens

Not all Wranglers are created equal. Although they are all clearly descended from the original World War II Jeep, the Wrangler has seen four generations dating from 1986 to the present. Finding the right carpeting with the right color is going to be important for your Wrangler.

Carpet for fourth generation JL Wranglers isn’t readily available yet but if you own one of the latest models, you probably aren’t quite ready to replace it yet anyway. As long as you find the right carpeting for your generation Wrangler, you can mix and match the colors as much as you want.

If you’re satisfied with your Wrangler carpet or you just want to protect it a little better, you’ll want to look at the Jeep floor mat options. Carpeted mats are a great option for the Wrangler if you like a plusher interior but still want to easily clean the flooring. Carpeted mats can be removed for vacuuming and cleaning like any carpeting.

For a more rugged and durable look, many Wrangler owners opt for rubber mats. Rubber mats are sometimes called floor liners because they offer complete protection of the carpeting from moisture, dirt, and spills. They’re usually designed with a lip that makes it easy to remove and dispose of whatever is muddying up your Wrangler.

Checking for Rust Spots: Common Areas to be Wary of

Another reason to protect the flooring of your Wrangler is the elements. If you’re a top-off driver, you’ll inevitably expose your interior to moisture, sometimes intentionally! While the Wrangler can survive wet conditions and the flooring is equipped with drain holes, you’ll want to routinely check under your carpeting for rust spots.

Depending on your generation of Wrangler, you’ll find several drain holes under the carpeting. Look for them on the front floorboards, on the rear floor (on some models), and in the cargo area. If water is allowed to collect and not drain properly, you might see some rust starting to form.

If you happen to own a Wrangler that doesn’t have drain holes in the rear, some owners have suggested unplugging all the drain holes and doing a hard brake to “help” the water make its way to the front drain holes.

How to Redo the Entire Carpet

If you’ve decided that because of age or style (or pets or kids) that your Wrangler needs more than sprucing up with mats, it might be time to replace the entire carpet. And it’s not as difficult as it may seem. You can easily find a molded carpeting kit designed to fit your Wrangler exactly. Carpeting can be replaced in the front, rear, and in the cargo area, if desired.

When looking for carpeting options, be sure to know the exact year of your Wrangler as well as the desired color because the options are plenty. Along with color choices, you’ll also be able to select the carpeting material with anything from plush carpeting to cut vinyl that’s water resistant and can easily be hosed off (be sure to remove those drain plugs if you do).

Some might argue that Jeep Wranglers never die, nor do they fade away. They simply find a new owner to make it their own. Whether it’s your own tried and true Wrangler or a new-to-you Wrangler that you’re looking to revitalize, flooring options, both mats and carpeting, are an easy way to give it a little polish.

Dave D, 2007 Jeep Wrangler JKU Merchandising
I have owned YJ’s and TJ’s in the past. After not owning one for several years I got the bug again and decided to go buy one. On a whim I saw this one and went to the dealership on the same day while my wife was at work and came home with it. She was a little bit surprised (mad) to see the Jeep in t...
Previous Slide Next Slide SEE ALL PROFILES