Exhaust pipes are an integral part of a vehicle that releases its waste by-product. They come in different shapes and sizes and have different functions. An efficient exhaust system can improve your rig's overall driving performance as it removes the used gases processed by the engine more efficiently. You can check our wide array of exhaust pipes and accessories here.

Exhaust systems often seem like a complex series of aluminum pipes that twist and turn for no clear reason. In reality, every connection and bend in an exhaust serves a purpose. In this information guide, we’ll discuss the history of mid-pipes through several Wrangler generations. We’ll also explain the difference between catted and non-catted pipes, going into more detail of the exhaust flow loops and loop deletes. In addition, we’ll cover the purpose of exhaust spacers and finally a general overall maintenance recap on how to care and prevent rust on exhaust pipes. 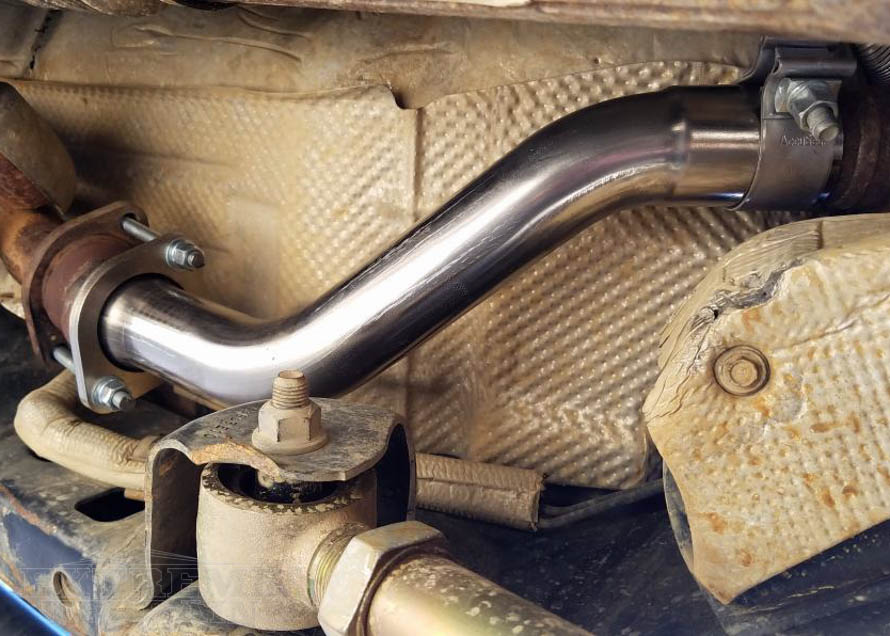 The Purpose of a Mid-Pipe

The piping of the exhaust system is designed to transport the exhaust gases produced by the engine in the front along the length of the Jeep to the muffler in the back. Along the path, the pipes need to maintain a completely sealed connection that offers a stable level of pressure to reduce the amount of back pressure, which affects the engine’s overall performance. Along the exhaust route, the mid-pipe is located between the catalytic converter and muffler. Mid-pipes can vary in length and overall function according to the exhaust system.

Jeep has made significant changes and improvements to the Wrangler over the years. The exhaust system and mid-pipe itself has been part of those redesigns.

YJ Wranglers built from 1986 to 1995 came with three different engines during its lifespan. A 2.5L 4-cyliner, 4.2L 6-cylinder, and a 4.0L 6-cylinder. The YJ’s exhaust piping starts from the engine’s header, leading into a front pipe that connects to the catalytic converter, from there a short, straight mid-pipe leads the connection into the muffler, followed by the tailpipe. This meant the front pipe had a unique downward bend from the header down to the Jeep’s underbelly. The bend varied slightly between the 4-cylinder and 6-cylinder engines, but the mid-pipe connecting the catalytic converter to the muffler was more of direct connection.

TJ Wranglers built from 1996 to 2006 came with a 2.5L 4-cylinder, 2-4L 4- cylinder, and the 4.0L 6-cylinder. The TJ had a variety in the number of catalytic converters, according to the model year. TJ models around 2000 had three catalytic converters that were positioned closer to the headers. This presented a change in length and route for the mid-pipe leading to the muffler. In addition, in 2004 the Jeep Wrangler Unlimited was introduced, which extended the length of the standard two-door TJ model an additional 15-inches. This had an impact on​ the overall length of the exhaust mid-pipe, extending the systems span from front to back.

JK and JL Wranglers, built from 2007 to 2018, started with a 3.9L six-cylinder engine that was later replaced by a 3.6L six-cylinder Pentastar engine in 2012. The JK generation also introduced a four-door Wrangler model in 2007, which altered the length of the exhaust system. In addition, the JK launched a different orientation with the catalytic converters, positioned further up front in the exhaust line. The newest and current JL generation has followed along the same lines as the JK, retaining the 3.6L Pentastar engine and exhaust system.

Catalytic converters serve an important purpose in the overall emissions of the Jeep’s exhaust. They help provide a cleaner exhaust emission coming out of the tailpipe and are required in most states. Elimination of the catalytic converter can be done with straight-through exhaust systems, but this produces a variety of emissions issues and requires a higher level of alternate engine fuel management. The theory focuses on more exhaust flow with less restriction from the headers through to the tailpipe, which in turn increases horsepower. Generally, these kits also eliminate the muffler, which increases the overall sound of the exhaust. It’s important to be aware of your state’s emissions standards if you plan on driving your Jeep on local roads without a catalytic converter.

Starting with the JK Wrangler line up in 2007, the catalytic converters on the Jeep were moved farther forward on the exhaust line. This was done to retain proper pressure in the system and maintain equal length on both sides of the exhaust line for proper scavenging, or pull, of exhaust gases. A Y-pipe comes over from the passenger side, but to maintain an equal length of pipe on both sides, there’s a loop in excess piping on the driver’s side. Some concerns arise from possible contact of the loop and the driveshaft when lifting the Jeep or during heavy trail articulation. Loop delete kits are designed to replace the loop with a shorter more direct pipe connection between the driver side catalytic converter and the exhaust Y-pipe. The problem that may occur when eliminating the exhaust loop is the disturbance in scavenging or pulling of the exhaust gases. The miss-matched length, when compared to the passenger side, could cause a slight loss in horsepower. Although the potential loss is often considered in the single-digits and virtually unnoticeable, it’s important to be aware of the potential side effect.

In situations when a Y-pipe is introduced after the catalytic converters, the system runs close to the front drive shaft CV boot. Starting in 2012, JK models with the Pentastar engine, came with a Y-pipe design that positioned the exhaust very close to the CV boot. This problem becomes more serious when lifting a Jeep over 2.5-inches. The drop-in angle of the drive shaft due to the increase in lift height, or trail articulation, causes the exhaust mid-pipe to come in contact with the rubber boot of the drive shaft. If continuance contact is made, the heat and movement will eventually wear away the rubber boat, causing it to tear. When the boot is torn it can allow dirt, sand, or other elements to work into the driveshaft joints and eventually lead to failure. An exhaust spacer is designed to push the Y-pipe back just enough to increase the clearance needed for up to a 5-inches of travel.

Due to the very nature of the exhaust’s large range of temperatures and exposure to the elements, they are constructed from aluminum. Generally, aluminum does well when it comes to general overall corrosion, but the large variances in temperature cause an exhaust system to corrode faster. If you’re located in the Northeast or in a cold environment that is exposed to snow, ice, and road salt throughout the year, the corrosion process is much more aggressive. Although corrosion is inevitable in those climates, there are some preventive measures you can take to prolong the corrosion of the system. The first step is to avoid driving your Jeep in the snow or when salt has been applied to the roads. If you drive in these conditions, promptly cleaning the underside and exhaust of your Jeep when you get home is helpful to delay any corrosion. Routine inspection and replacement of corroded hardware with high-grade alternatives is also good practice to avoid larger problems down the road.

Addressing Issues Before They Become Problems

As discussed in this information guide, exhaust systems are an important part of your Jeep’s overall emissions and engine performance. The expelling of clean gases is an important process to the Jeep and environment. When modifying the height of the Jeep, it’s always important to take into account all of the mechanical parts, including the exhaust system. Properly addressing any potential issue and overall maintenance will help ensure years of reliable performance.

This is the 3rd time I have ordered and each time very satisfied with the experience, shipping, and the quality of the parts

Nuno P, 2013 Jeep Wrangler JK Sr. Customer Experience Specialist
Originally from Portugal, and that’s where I started my passion for Off-roading, as soon as I got my DL, I would grab my Dad’s Shop 4x4 truck and take it off road, bumpers, snorkel and armor on that truck were all hand made at my dad’s shop, traveled all over mountains of Portugal with that truck. S...
Previous Slide Next Slide SEE ALL PROFILES
Close 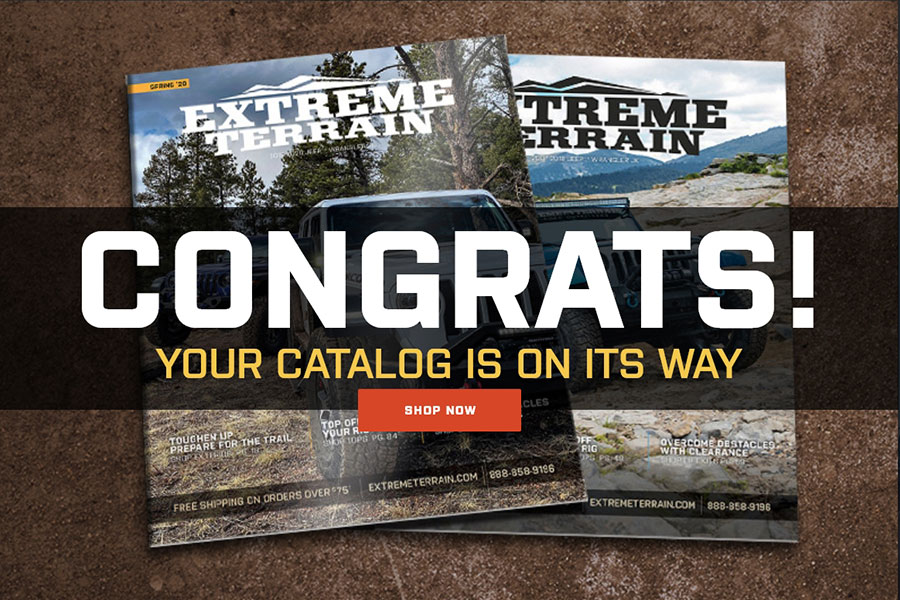